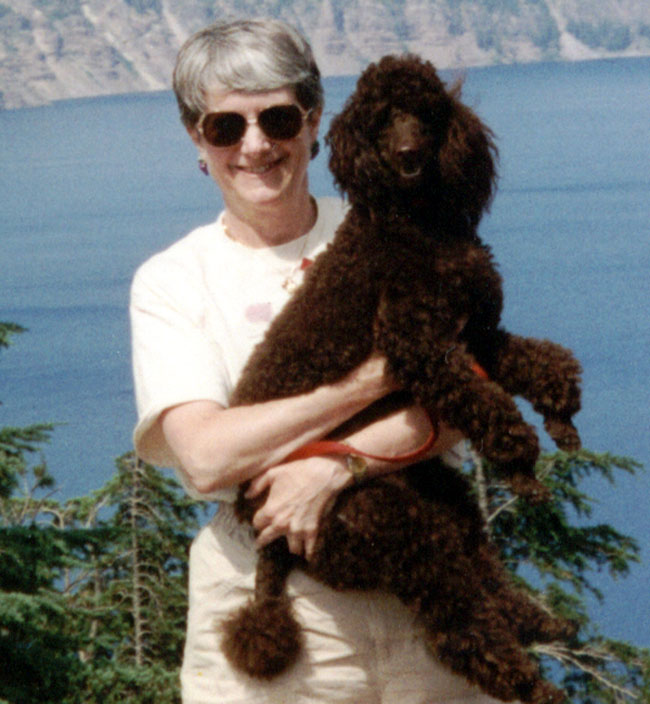 Poodles have a natural joie de vivre that says, "I'm so glad I'm a poodle!" If you are looking for an intelligent dog to bring joy into your life, you need a poodle!

A poodle does not shed, so it's perfect for people with allergies or those who don't like dog hair everywhere.

Above is a picture of Marjonlie Chocolate Truffle CD RN and me with Crater Lake in the background. Chocolate is a brown miniature from Marjonlie Kennel in Fresno, California. His sire is Ch. Marjonlie Tristan Lenoir, and his dam is Marjonlie Chattanooga. His littermate, Marjonlie Prevailing Party, has finished his championship.

I bought Chocolate on a "spay/neuter contract," a very common practice. This means I agreed to neuter him. Therefore I cannot show him in conformation ("dog shows") because he isn't "intact." But more to the point, this keeps me from becoming a "backyard breeder," which is something no reputable kennel wants because all their efforts at perfecting their dogs will be for nothing.

Get in touch with me if you'd like further information about this kennel. Unfortunately, they do not have a website.

They are very reputable and care about where their pups are placed. Their first question to me: "Do you have a vet?" Huh? Who picks a vet before they even have a dog? People who buy pups from them, obviously! As it happened, one of my piano students is a vet, so I could answer "yes"!

Chocolate's sole purpose in life is to give and receive love. At this he is a consummate master! He is definitely a lap dog. Sit down, and he does a Salvador Dali clock number within 5 seconds.

I am a truly terrible photographer, but that does not stop me from taking pictures!

Here is a close-up of Chocolate at one year. He is a little furry and I didn't get him entirely in the photo, but when one is photographing a dog (especially if the photographer has such poor skills), one often must be satisfied with the result of serendipity, whether the dog is fresh from the groomer or not! Note the "poodle grin." I am advised that is what this is called. Cute, huh?!

I teach piano and needlework, and when I get ready to go to a needlework show, I must make kits and then pack boxes. Chocolate was a big help here with the roll of packing tape. At least this was a used-up core! It's a lot better than the time he unraveled an entire ball (120 yd.) of #12 pearl cotton (embroidery thread) and tangled himself in it! When I tried to disengage him, he thought it was a wonderful game! It took a while...

I've had requests for puppy pix, so here they are. Be ready to see the cutest poodle puppy who ever trod the earth!

This is Chocolate at approximately 4 months. The owner of the bitch did his haircut. Pretty cute, huh?! Here he is at about 5 months. Local groomer (whom I no longer use, for obvious reasons) did the haircut. Still cute, huh? Love those short ears! To keep with tradition, here's another picture with the same view of the kitchen floor. Chocolate is about 2 years here. Very aristocratic, no? (And a great haircut! His groomer is the very best I've ever had for any of my poodles.) And here we have him napping in the sun. He's 5 years in this picture. Here he is at 10 years.

In 2010, another poodle came to live with me: Jamonica Kona Pahupahu ["Firecracker"]. He's a pistol! He and Chocolate are cousins; the vet explained it to me and I've forgotten exactly what type of cousins he said they are. Chocolate's sire is Kona's great-grandsire. You can tell they are related by their faces. Kona has finished several obedience titles; the important ones are CD and RE. We are working on CDX (so much new to learn!) and RAE in the sequences. I have pictures to put up but not the time to do it. Be patient!

Chocolate is now retired; he blew out both his ACLs and has a terrible time with "sit" and "down," even though he's on medication. I don't have the heart to continue to show him! He is 14 now and entitled to slow down a bit!

In September of 2013, Alegria George Washington joined the crew. He's a silver. My dad (named George) said to me, "What are you going to name him? George?" I'm pretty stupid but not that stupid, so I said yes, I was. My plan was Wolfgang Amadeus ("Wolfie") because I'm a musician; Wolfgang Amadeus's wig was silver. Who else had a silver wig and the first name of George? Finally, it came to me.

There is talk of another poodle (September, 2014). A black one. He is from the same lines as Chocolate and Kona, and there is such a high chance he will be a spectacular dog that it will be hard for me to resist getting him. Thinking perhaps Elvis Presley....

What I Know About Dogs

Come back to this section. I'll add files as I have time. Music and needlework keep me pretty busy.